Cedar Fort LDS June 30, 2010
Agent Bishop was released almost a year ago and it is currently the #1 book on Cedar Fort’s top ten Year-To-Date BESTSELLING list! Everyone, check it out! It is an easy read – I was very intrigued and didn’t want to put it down!! 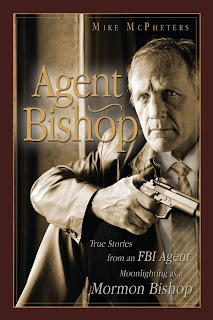 When Mike got his dream job as an FBI agent, he never thought he would also be called as an LDS bishop four times! Follow Mike as he recalls his adventures as an FBI agent and inspiration as a bishop. As Mike fought crime and Satan with a pistol in one hand and scriptures in the other, he learned the importance of obedience in both jobs. Filled with surprises and unexpected thrills, and told with humor and ease, Agent Bishop: True Stories from an FBI Agent Moonlighting as a Mormon Bishop is the perfect memoir for the FBI agent in all of us!
“I was bishop 15 years of the 30 years I served in the FBI,” McPheters said. “When I was released this last time, in my sixth year as bishop, I asked the stake president what I did wrong. I was still raring to go.”

Along the way, he was married and became a father of five.

Now he’s written a book about his adventures using the notes from his personal journals, newspaper clippings, fellow agents’ recollections and personal research.

“Agent Bishop: True Stories From an FBI Agent Moonlighting as a Mormon Bishop” was released in September by Cedar Fort Publishing. More than 8,000 copies of the memoir have sold, with most sales outside of Utah to non-Mormon readers.

Sara Schilling, Tri-City Herald, gave the following customer review:
MOSES LAKE When Mike McPheters came home from a long day as a special agent with the Federal Bureau of Investigation, he didn’t knock back a few beers with his buddies.
He broke out his Bible and went to work as a bishop in the Church of Jesus Christ of Latter-day Saints.
That meant McPheters, 66, of Moses Lake, might kick down a door in pursuit of a criminal one day and counsel teens at church the next. In one instance, he performed a wedding as a bishop one week and not long after he busted up another ceremony as an agent to arrest the groom.
There were a lot of instances like that, McPheters said with a chuckle. It made (life) very interesting.
It also made for an interesting book. McPheters recently published Agent Bishop: True Stories from an FBI Agent Moonlighting as a Mormon Bishop, through Cedar Fort Inc. in Springville, Utah. He s embarked on a cross-country tour to promote the book.
McPheters joined the FBI in 1968, and his 30-year career took him all over the world. He worked on everything from a stolen car ring in Miami to a gruesome slaying of Americans in the U.S. Virgin Islands.
He made drug busts, ran down bank robbers and kidnappers and even survived a shoot-out in Elgin, Ore. Through it all, he served as a bishop in Florida, Oregon and Utah, counseling church members and overseeing the tithes and offerings.
I fought crime and Satan with a pistol in one hand and the Scriptures in the other, he writes in Agent Bishop.
The now-retired G-man spent 2 1/2 years sifting through memories and crafting the book. He started it at the suggestion of his wife, Judy Ann.
He’s had so many interesting cases, (and) he had a lot of interesting things happen to him while he was a bishop. I just thought he needed to write it down, she said. I said, Even if it doesn’t sell any copies, at least your kids will have it. But the book has a much wider audience than that. It’s available at Costco, Latter-day Saints bookstores around the county and Amazon.com.
McPheters retired from the FBI in 1998 and since has worked as a community college professor, interpreter and private investigator. He s also done extensive lecturing on cruise lines.
The last chapter of his book chronicles how he helped with the relief effort at the Pentagon after the 9/11 terrorist attacks.
He and Judy Ann had been in Washington, D.C. about to take a tour of the White House when the plane hit.
McPheters used his retired FBI credentials to get behind the perimeter and helped the Red Cross hand out food to rescuers.
When I took an occasional break, I noticed so many inspirational scenes that stirred me inside, he writes. Stout military men stood unabashedly together, arms and hands linked, offering up their prayers to Almighty, not caring that all could hear. Bibles were placed on every table, and people were reading them.
Get your own copy of AGENT BISHOP!!

One thought on “Agent Bishop”

Visit all our imprint sites!